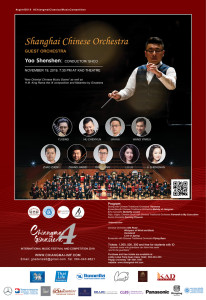 Online Sales Finished
Tickets are also on sale at 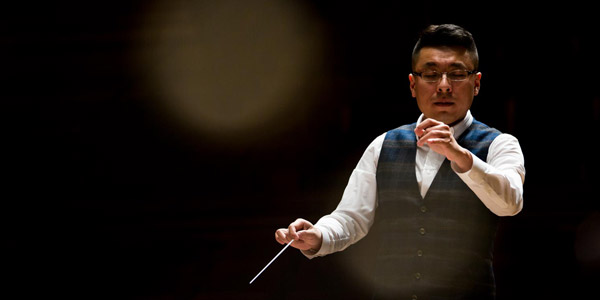 Yao actively engaged in the popular education of Chinese music. He led the Chinese orchestra of Shanghai Normal University Music College to the Gold Award of National College Student Art Exhibition for multiple times. Since 2015, Yao has been serving as the chief conductor of Shanghai Youth Chinese Orchestra. 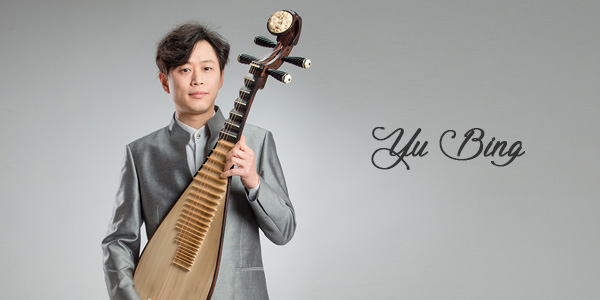 Yu Bing is a pipa player of Shanghai Chinese Orchestra, artist of Shanghai China International Arts Festival. He was graduated from Shanghai Conservatory of Music. In 1998, he entered Shanghai Chinese Orchestra. He won the Highest Level of Outstanding Performance Award in Shanghai Spring International Musical Festival, the Second Prize in Tianhua Cup National youth Pipa Competition, the 2005 Yearly Golden Music Record in Japan, etc. successively. In recent years, he took the initiatives to do the trials for cross-boundary cooperation so as to popularize pipa skills and Chinese traditional culture arts. He ever partnered with Shanghai Chinese Orchestra, Shanghai Opera Theatre, Ming-Chuen Wang, Ye Xiaogang, and many other celebrities, and has been invited to perform in many internationally renowned music festivals. In 2017, his performance in musical theater show The Conqueror was honored as the appointed piece to be included in “Youth Artist Development Program” of the 19th China Shanghai International Arts Festival. 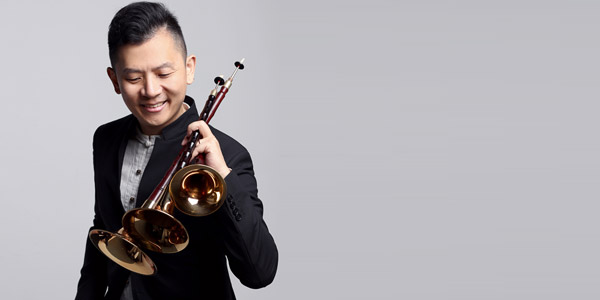 Hu Chenyun, national first-level performer, isa suona player of Shanghai Chinese Orchestra and board member of the Shanghai Musicians Association and Suona Specialized Committee Chinese Musicians Association. He was invited to visit and perform in more than 30 countries around the world, and has cooperated without standing orchestras including Shanghai Symphony Orchestra, L’Orchestre National de
Francaise to perform solo in several important performances. In 2015 he presented his special the Shanghai symphony Orchestra concert hall. 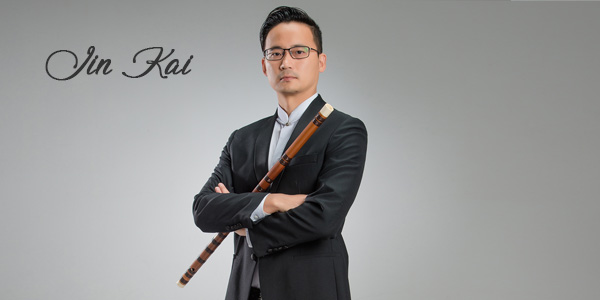 Jin Kai now is a member of the Shanghai Chinese Orchestra. He was a guest of The Venice Modern Music Festival, Chinese Culture and Arts Festival in Paris and Amsterdam. He participated in Adelaide Modern Music Festival, Chinese Music Festival in Hamburg. In 2008 and 2009, the work Toy, concerto of the program Presences China, secured for him the championship and at the same time, he was invited by its composer to Canada to play it accompanied by Montreal Symphony Orchestra. Jin Kai played as a soloist in numerous concerts on important occasions in SHCO. In 2012, his performance of the concerto Song of Grandeur in the Beautiful China – the Golden Award repertoire of The 4th National Minority Arts Festival – led him to the title Best Player. Through Jin Kai’s performance, audience can not only appreciate his techniques, but can also see the nice integration of the inheritance of music culture and its contemporary development. 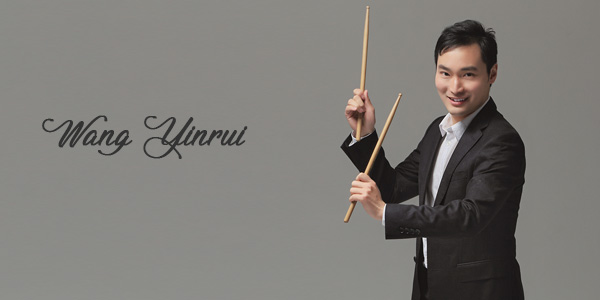 Wang Yinrui is the chief performer of the Percussion Part at Shanghai Chinese Orchestra. He is also a Shanghai Municipal CPPCC member, receiver of the Youth Medal and of Shanghai Outstanding Artist Medal, and director of the International Percussion Education Association, the Chinese Percussion Society of Chinese Musicians Association, the Percussion Special Committee of China Nationalities Orchestra Society, the Percussion Special Committee of Shanghai Musicians’ Association and the Shanghai Percussion Association. Wang has visited dozens of countries and regions. In 2008, he won the first prize at the Percussion Competition for National Higher Colleges and Universities of Musical Art. In 2012, he joined the Orchestra to perform at the Fourth National Minority Theatrical Show and won the Best Performer award. In 2015, he won the Gold Medal at the Second National Ruan Xian Art Exhibition. In the same year, he also won the Gold Medal at the Third International Invitational Contest of Jiangnan Stringed and Woodwind Music. In 2008 and 2015, he successfully held a personal concert. Wang is a very skillful performer and his style is enthusiastic and unrestrained, which makes him the focus on the stage. He is good at dealing with all kinds of music, and the timbre of his percussion sounds diversified. Wang is so popular that the media call him “Prince Percussion” 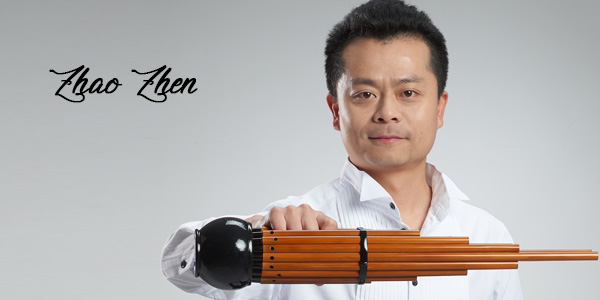 Zhao Zhen is the Sheng instrument performer of Shanghai Chinese Orchestra, member of China Musicians Association and Shanghai Musicians Association. After being admitted to Shanghai Chinese Orchestra, he has performed in over a thousand concerts, and his footprints are all over dozens of nations and regions in the five continents. He once participated in the performance of Hong Kong International Modern Music Festival, Macao International Art Festival, Jeonju Bamboo Cultural Festival in South Korea, Adelaide Music Festival and Cervantes Music Festival, to name just a few. He acted as solo and leading player in various important concerts such as Shanghai Folk Music, Dream of the Peony Pavilion, Rising Stars and New Voice of Dream, etc. He has won such honors as the first prize in the Domestic and Foreign Jiangnan Traditional Stringed “Woodwind Instrument Invitational Competition in 2006, golden prize of professional group in the combination shows of folk music” Chinese traditional instruments of the 10th China Art Festival, and golden prize of professional group in the 3rd Domestic and Foreign Jiangnan Traditional Stringed &amp; Woodwind Instrument Invitational Competition in 2015. 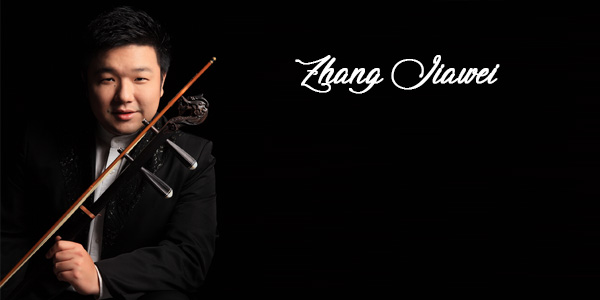 Zhang Jiawei is a Gaohu player in Shanghai Chinese Orchestra and a second-level national performer who graduated from Erhu and Banhu major of Shanghai Conservatory of Music. Since 2005, Zhang has been a Gaohu performer in Shanghai Chinese Orchestra as well as a soloist and lead performer of Gaohu and various Chinese stringed instruments. In 2010, Zhang held a solo bowed-stringed instrument concert. Zhang acted as the lead Gaohu performer in many major performances within the delegation to various countries and regions around the world. Several tracks adapted by Zhang have been included in the national Gaohu examination albums. 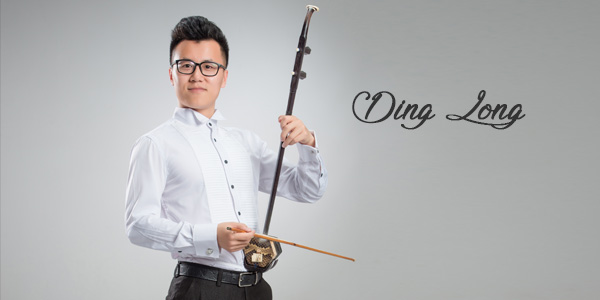 Graduated from Shanghai Conservatory of Music, Ding Long is a young Erhu performer in Shanghai Chinese Orchestra, member of Shanghai Musicians Association.
Since entering the Orchestra, he has successfully fulfilled a variety of major performance tasks and accompanied the orchestra to visit many countries and regions. In 2007, his Erhu solo in the Quintet Flying Bees presented in Shanghai International Art Festival Opening Ceremony – Chinese Orchestra at Sea music live show received affirmative comments from all circles. In 2018, he accompanied the orchestra for tour performance in Europe, during which his performance in Quintet Flying Bees gained appraises once again from European audience. Through multiple performances, he has gradually developed into a young performer with mature skills and stage manners. 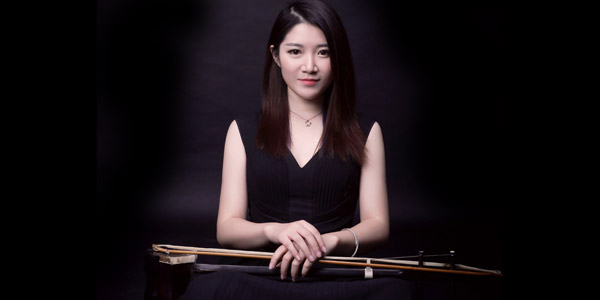 Lu Lu is a young Erhu player at Shanghai Chinese Orchestra. She is a member of the Erhu Commission, Shanghai Musicians Association.Lu is now pursuing a Master’s degree of Arts at Shanghai Conservatory of Music.Lu has won a list of awards: the Gold Medal of Professional Group A at the Second Hong Kong International Erhu Competition; the Gold Medal at the Erhu Competition of the 32ndShanghai Spring International Music Festival,and the “Outstanding Small-Scale Work” and”Newcomer Award” at the Shanghai Selection Exhibition of Performing Arts in 2017.Lu is good at exploring what lies under the music and expresses it in diverse ways.She seems composed and passionate in her performance on the stage, showing the unique charm of a contemporary young folk musician. 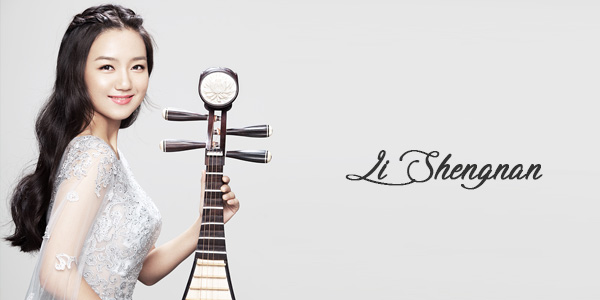 Li Shengnan is a pipa player in the Shanghai Chinese Orchestra. She has both talented skills and abundant performance experience, always ready to try different styles. She has successfully held over ten concerts in forms of solo, ensemble and concerto in New York, Beijing, Hangzhou, Wuhan, Xiamen and many other cities. The concerts have won a wide range of positive remarks on the form, programs and performance. The premiere works performed by Li Shengnan, including Early Spring, Silently, Mid-lake Pavilion, Waterfall, and Legend of Jangar, have been among the most popular programs on the stage.

About The Shanghai Chinese Orchestra Concert

Founded in orchestra in China. SHCO is famous for its harmonious cooperation among the members of orchestra and its excellent mastering of all kinds of works. The 1952, Shanghai Chinese Orchestra is the first big-scale modern Chinese Orchestra plays an important role in the development of Chinese music. In the history of Shanghai Chinese Orchestra, there were a number of great artists who made significant contribution to the national music development, such as Zhang Ziqian, Lu Chunling, Sun Yude, Gu Guanren, Min Huifen, Yu Xunfa, Gong Yi, etc.

In the recent years, the SHCO, which oriented on explaining national music in modern and international ways, organized and performed a lot of themed concerts which blended our national culture, national sentiments, as well as national spirits into the music, successfully representing national music in Shanghai style like《New Oriental Chinese Music Scene》《The Bund》《The Blooming of the Gardenias》《The Concerts of Poetry, Literature and Painting in Chinese Music》. And the New Oriental Chinese Music Scene was performed in the opening ceremony of the 18th Chinese Shanghai International Festival of Arts as well as the special performance for the 45th anniversary China-Greece relations. At the beginning of the year 2018, the concert New Oriental Chinese Music Scene was brought by SHCO’s tour performances to eight cities in four countries including Britain, France, Belgian and Germany. These concerts were all performed in the world famous and first-class concert halls throughout Europe, having made a great coup during the nearly-20-days concert tour.

In the future, SHCO will step up efforts to radiate the inner vitality of Chinese national music. With the kind of national music which is more inclusive and more glamorous of the times, SHCO is ready to inherit the urban context and show the brand-new conditions of national music, as well as looking forward to coming across every bosom friend.