Let’s Travel with the Accordion 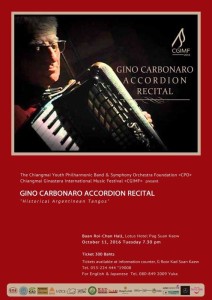 Tango – A little-known chapter of history

The Tango was born in Argentina and Uruguay the late nineteenth century. Within a few years it becomes an event of exceptional importance, immediately exported to all parts of the world. To understand the dynamics of the Tango, it is necessary to retrace the history of Argentina at that particular time.
Towards the end of the 800, Argentina is the fifth largest economy in the world, starting in 1880 becomes a destination for mass immigration and multi-ethnic. It is mostly Spanish, Italian, French, Poles, but also Jews, Russians.
Immigrants arriving in the port of Buenos Aires are welcomed by “compadritos”, [1] and on arrival are piled in large buildings (conventillos), which is assigned a bed and offered a job.
Soon, immigrants realize that the work is unsustainable, from dawn to the last light of sunset. Freedom is lost. Far away from their land, family, parents, private affections, devoured by nostalgia, these men put in crisis the value of the same existence.
Slowly, the constant influx of immigrants is double within a few decades the population of Argentina, making change the male-female relationship, that in Buenos Ayres become (it is said) of four men for every woman. Few women to men who have no opportunity to satisfy their emotional needs, their sexual needs.

The abnormal ratio between males and females enhances the development of prostitution, and the multiplication of local (Quilombos, Enramadas [2])
where young immigrants, come to spend your free time, talk to someone, to drown their sorrows in alcohol and admire the Gauchos [3] of the Pampas, experienced dancers, who waiting for their turn to go with a woman perform in amazing and applauded dance contests (among males) on the Milonga rhythm. [4]
Being long the wait, the “Mistress” think to hire the orchestras. These are small musical ensembles: the beginning, violin, flute, bass, concertina, [5] which were very successful interpreting “Milonga” and “Criolla” music typically Argentine (Tango is not yet born). Only after 1895 it will make an appearance on bandoneon, which will become the classic tango instrument.
Now, even the Mistress of the Quilombo on a show in front of the dancing customers with its compadrito [6], while some prostitute in turn may grant some dancing to the more good customers.

From Milonga to Tango

But, at that meeting, the dance became a different thing. The partners embraced in a provocative way, the compadrito-pimp showed his macho dancer skills inventing movements and figures with steps extemporaneous. The woman indulged, but the dance figures were at the same time aesthetic beauty and sexual provocation, certainly functional to the place and at the time, however, necessary to take the overheated environment climate.
That’s how slowly you define the Tango. Tango as a spectacle intentionally to customers ‘particular’ and heterogeneous. Tango as the solace that makes life worth living. Tango that slowly becomes a symbol which will eventually recognize all immigrants.
Loneliness, despair, need love, bitterness, desire for a woman, unfulfilled sexuality, but also need to tell yourself that you are not alone in their misfortune, they say it all the words and music of Tango.

Tango. A sad thought that dances

Over time, the text became more important and capable of touching the soul strings of those who were the first and actual users of the Tango. It is so, that is transformed into Tango Milonga.
The Tango texts (lirics) speak of men who have been abandoned by a woman (Caminito), of meeting places with women dream (A Media Luz), of children who die with guilt for leaving the mother alone at home (Cumparsita), the dramatic situations and absolute pain (dolor I).
The Tango atmosphere is “fin du siècle”, melancholy and decadent. It is no coincidence that the Tango will have a fortune ever recorded in the history of music, with a term that has come to this day.
In fact, if the words of the weeping Tango and his muffled music aim to saturate the immigrant’s needs, the Tango danced simulates sexual pleasure, the need for physical contact with a woman, sort of simulated courtship, the pair of “tango” realizes in dance, within an ideal space-time in which the dancers come to live their moment of dream and of complicity with a woman or a real man or dreamed. Woman (or man) that fate grants for the duration of a Tango, and it will vanish into thin air, like a mirage, leaving only the memory that experienced evasion.
The return to the reality is marked by the harshness of the decisive final stages of music, signaling the end of the dream and return to reality. The drab prose of everyday life.